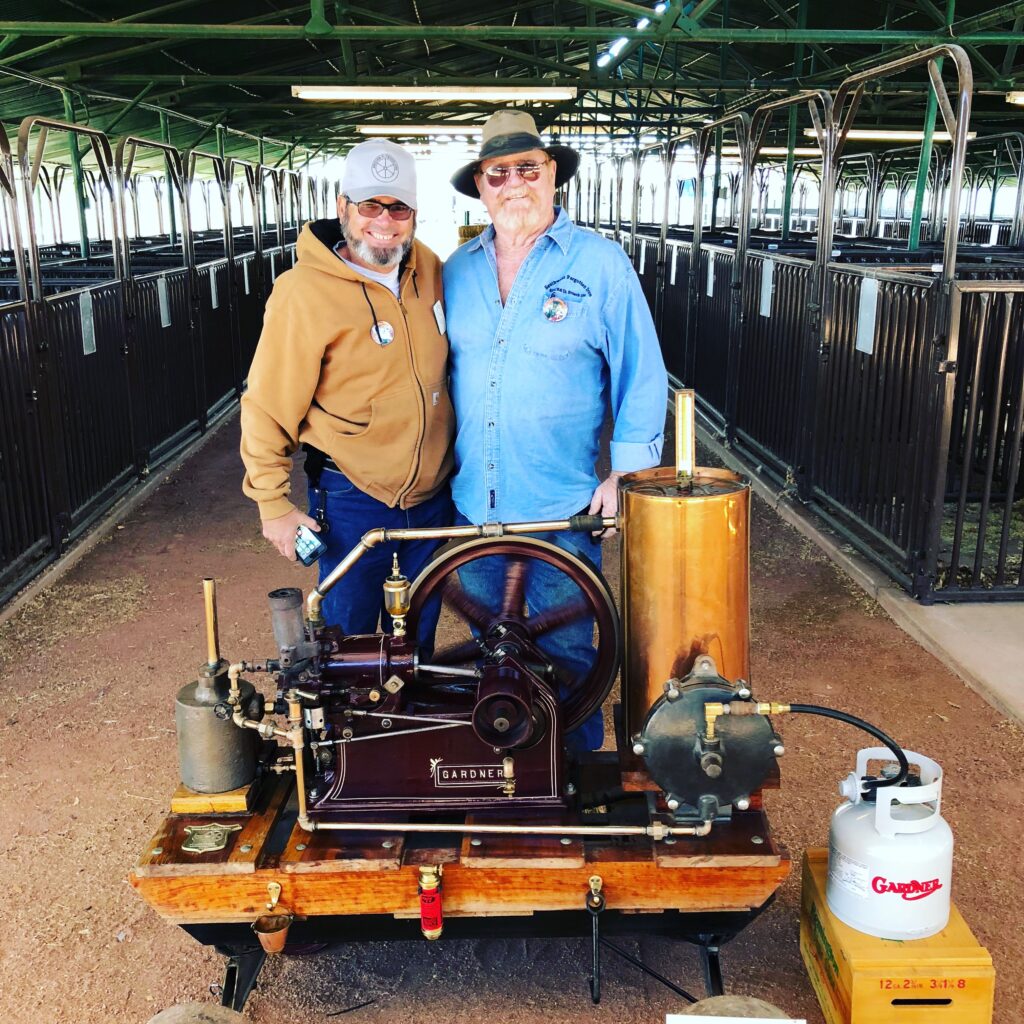 Its all about hit-miss engines when you talk to Redd Stanberry, Bill Lanier and Donnie Gideon. What is a Hit-Miss-Engine and why are antique engines important to Buckeye?  Redd Stanberry was born in a little ol’ town called Bovina which was the head quarters of the XIT or ten counties in Texas. The XIT Ranch was a super big rail head at one time.  When the rail head moved from Kansas City, the next stop was Bovina, population 1,404 and one REDD. “I had the run of the place.” said Redd.  Redd moved to Buckeye in 1964 and later started Arizona Gin Supply in 1973.  From a little town like Buckeye, we build gins in Africa and China.  “We tear’m down and re-build gins, put them in containers, send them to Long Beach and they get shipped all over the world” explained Redd.  Donnie Gideon was mentioned in the previous segment.

Bill Lanier Jr. is originally from North Carolina and moved to unincorporated Maricopa County near Buckeye in the late 1970’s.  Bill’s family lives and works along Citrus and Perryville where they operate a 2 and a half acre Dragonflye Farms raising miniature livestock. Bill has a total of 17 antique engines. In between working on the farm, Bill gives Redd and Donnie a hand.

Most engines were built between 1900-1925. People started getting electricity in the late 20’s and most rope pull 2 and 3 cylinder motors just went to the wayside.  “Anytime we can save an antique engine now, it is like saving a piece of the past”, said Redd. The rural areas were the last to get electricity, farmers would belt up an engine to run whatever piece of equipment they needed to run, like corn grinder, water pump or a generator. Back in the day, you had one or two engines that would run everything via the belts.   Today, everything  has its own engine, from a weed eater to a chain saw. In the early 20’s, the tractors came out with a clutch pulley on the side of it.  When the farmers got through farming at the end of the day, they could pull it up, put the belt on the clutch pulley and have a portable engine. 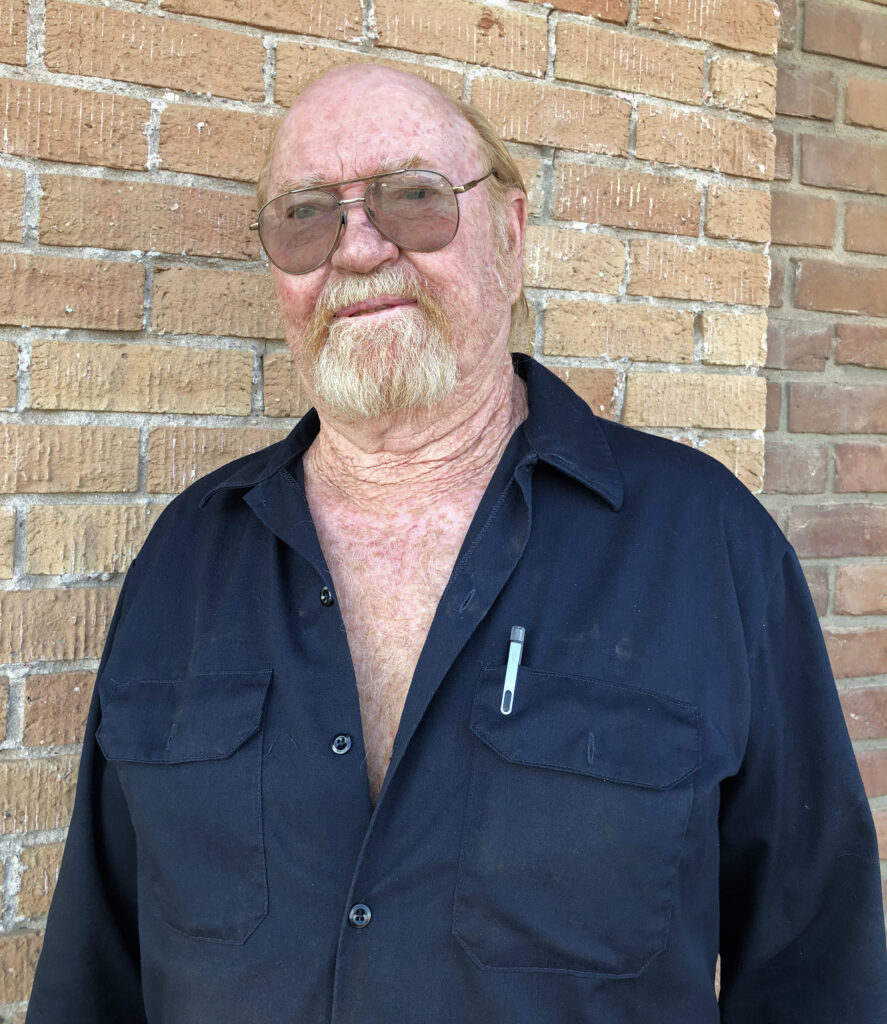 Redd has one of the bigger antique engine collections in Arizona.  He remembers buying an engine from a guy who told him,”My grandfather bought this engine and I had to promise him I would never sell it.   ‘Don’t ever sell that engine cause I am not sure this electricity is here to stay.’ ”  Eventually  he had electricity and they bought a electric motor to put on the milking machine and he said, “Back in the teens the electricity wasn’t that reliable so people hung onto the old ways for a while.  Once they figured out they could buy a 5 horse power motor the size of a bowling ball and not have one the size of a coffee table, that changed their minds.”

At one time, Buckeye was just cotton fields everywhere! They used to pick all the cotton by hand at about 20 pounds per day.  Thanks to Eli Whitney ,the cotton gin was invented the late 1700’s.   Buckeye and Goodyear both grew cotton for Goodyear Tires.   At one time, all tires were cotton cord instead of steel belts and there was a big cotton supply here.  They had people coming from everywhere because it was all hand picked at the time. Goodyear Tire executives would visit the Wigwam to look at the cotton farms.  When I asked why Buckeye doesn’t make anything with the cotton these days, why do we keep shipping it out?  Redd said “There is nobody that spins cotton in the states anymore.  Most of the mills are oversees. We just can’t compete with the Labor costs.” 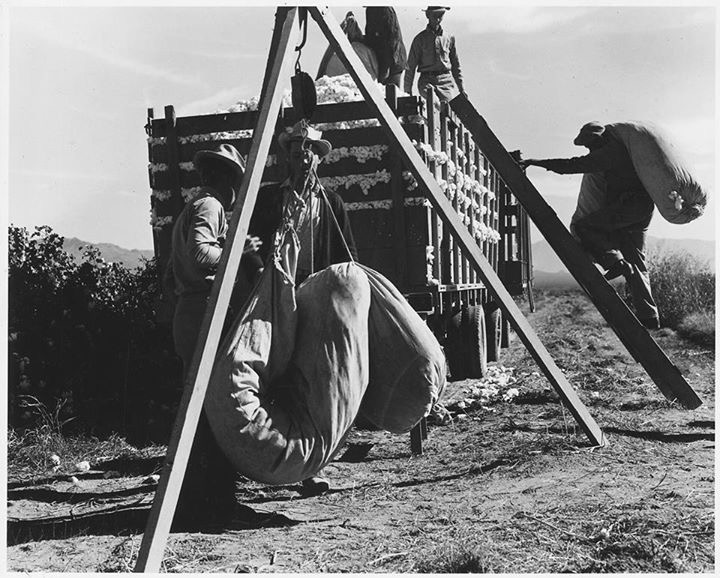 Bill Lanier Jr. will be bringing an actual mini cotton gin to the Buckeye Oktoberfest Engine Show.    Bill says, “We will be ginning cotton with a replica 10 saw gin from the early 19 to the 20’s. Today’s modern gins have up to 204 saws!”

Why is this Engine Show important?  “To show people what really happened in the past, we want to show people how we got to where we are now.  There are lots of things we wouldn’t have today if we didn’t have those engines.”, replied Redd.  Donnie added that television and social media have distorted history so much that kids have no idea what real history is anymore.  Tom Trainer of Arizona Early Days Gas Engine & Tractor Association has been instrumental in organizing all the antique engine collectors to participate in the upcoming October 13th, 2018 Engine Show in Buckeye. 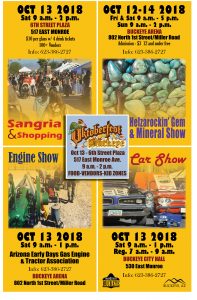 Stream lined steel against prickly saguaros bouncing along a lonely highway in a Chevy Apache truck with Duane Eddy, Hard Times playing on the radio.  Where did this 1950’s Task Force classic go in Arizona?  How many drive in movies, construction sites or big flat tires in the middle of nowhere did it carry? This truck supposedly came originally from California and rode out to Arizona and then bought from Donnie Gideon of Arizona Gin Supply. 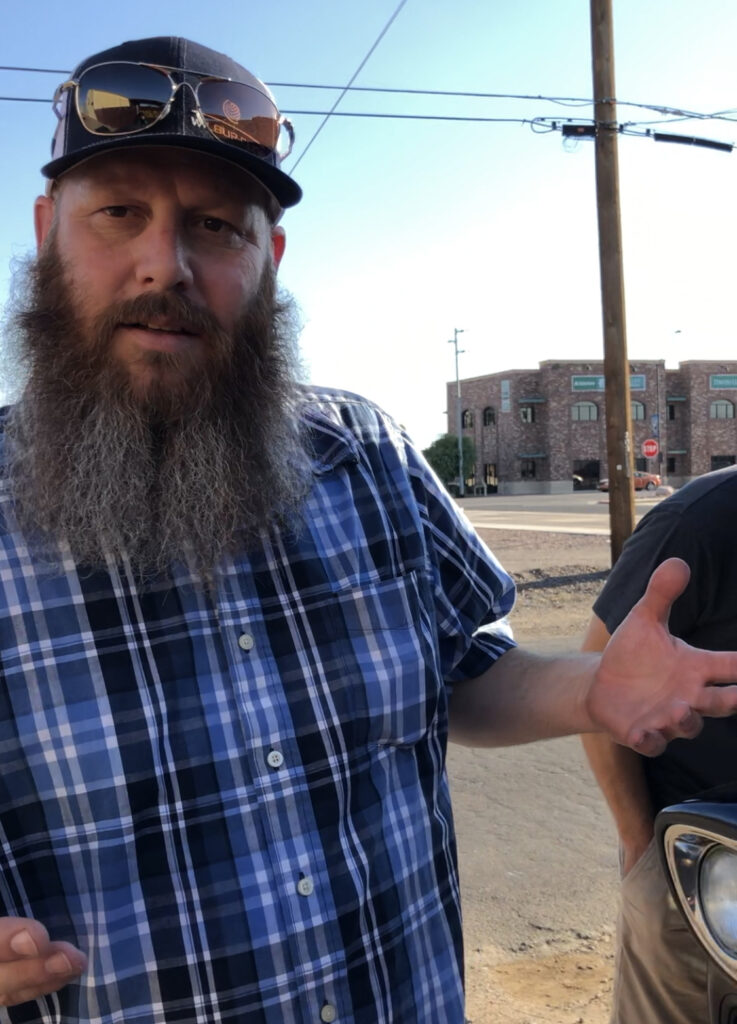 Arizona Gin Supply has been rebuilding cotton gins in Buckeye and world wide since 1973.  With his Get It Done Right spirit, Donnie was able to bring this 1959 Chevrolet Apache Truck back to the living! 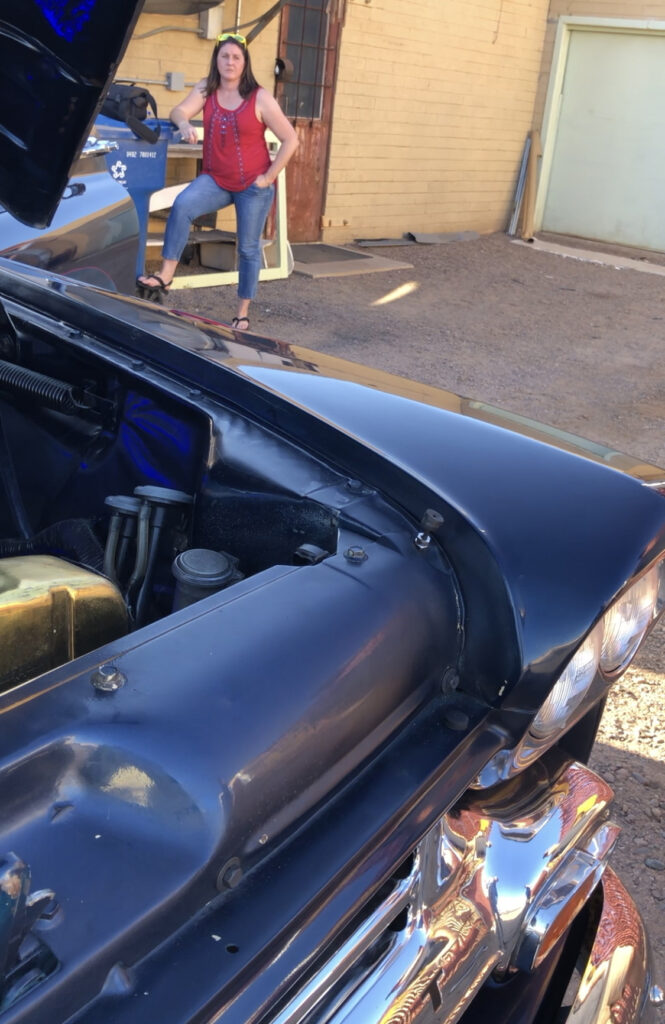 “We just started tearing things apart and fixing what we could”, says Donnie when he first bought the truck in 2016.  All the body parts are original. Nothing had to be after market. The body was sanded down, primed and painted indigo blue. There were redundant power wires that had to be pulled out and a new fuse box was installed.   “There are a few employees at O’Reilly Auto Parts that really know older vehicles!” said Donnie when he revealed where he bought the majority of the parts for this Work Force Truck fix up. 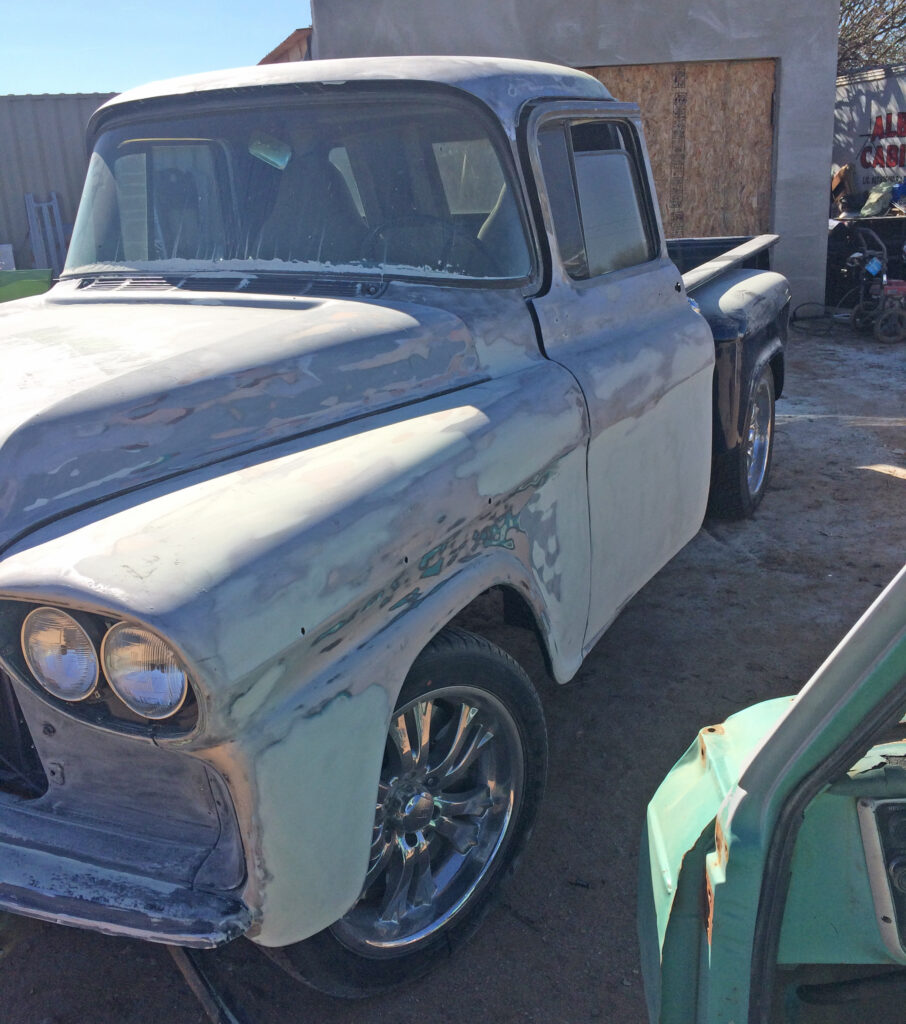 Donnie, who likes the feel of an old car but still wants to be safe, added subtle things to the engine that you would never see unless you pop the hood. If someone walked up to the truck it would take them a minute to realize original features have been changed.  He added custom flame brackets, blue accent lights, air conditioning and other safety features to the truck.  He restored the truck back to the 50’s as best he could. 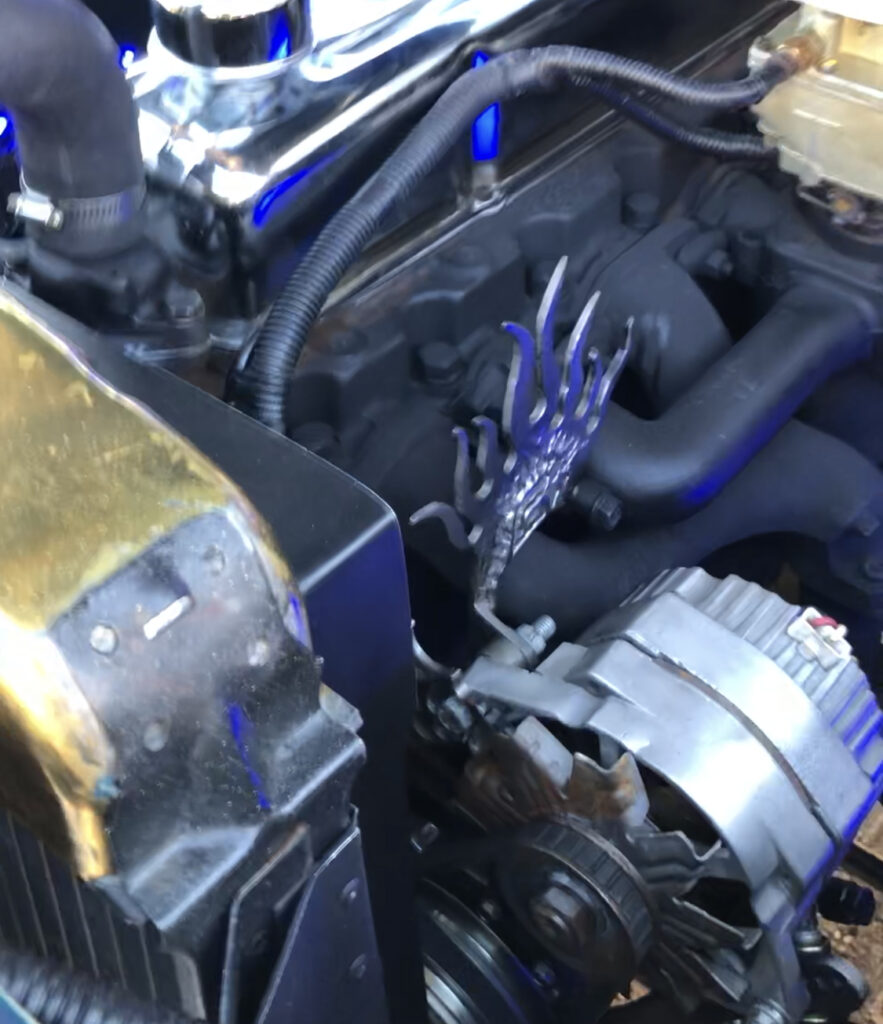 “It’s got the original 235 engine. These trucks you don’t drive you, YOU herd them between the lines.”, said Donnie.

Custom Bracket Holds Everything In

He put a lot of money and time into the suspension, he didn’t want to loose all the hard work just because he hit a pot hole.  Donnie depends on the experts like Alyron Customs of Tonopah, AZ who do upholstery and Guillermo Lopez, 623-449-2608 Auto & Diesel mechanic of Buckeye, Arizona.  Donnie also works with Contempo Upholstery located on the same property as Arizona Gin Supply.  Some parts also came from Napa Auto Parts of Buckeye. 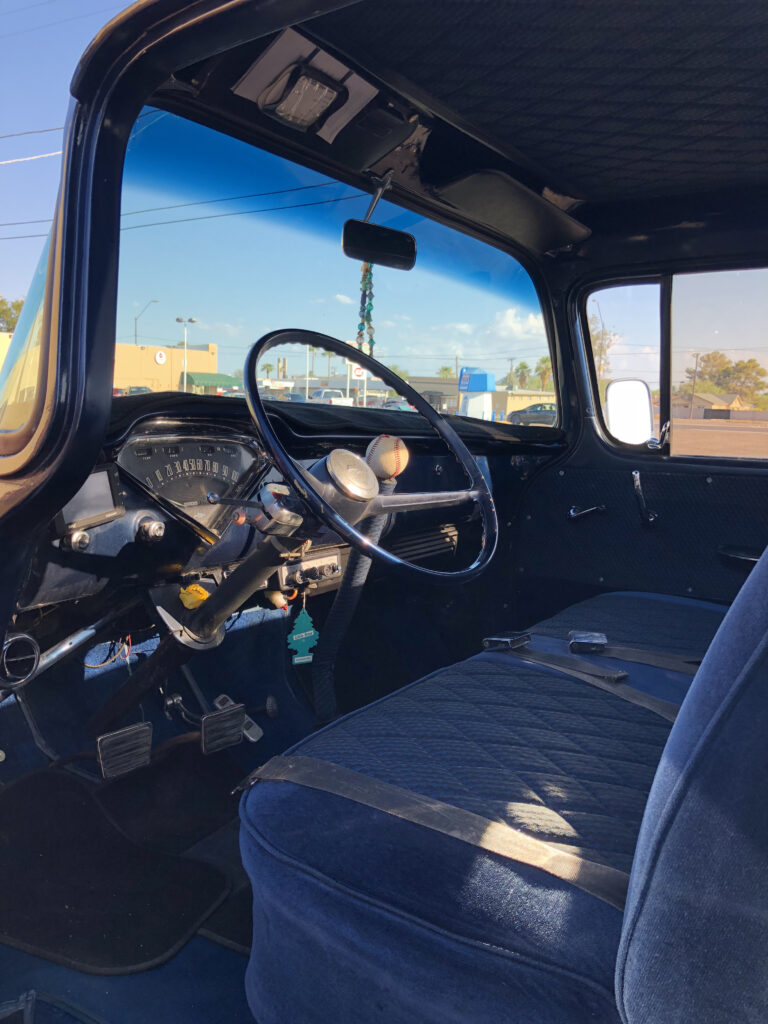 If your an automobilia fan like Donnie Gideon, you want to see more of these old cars driving on the road here in Historic Downtown Buckeye, Arizona. “There were some really cool cars driving in Buckeye in the 1950’s – we got to get them out driving again!”   Donnie and other Buckeye locals are starting up Buckeye Cruisers, a club for automobilia enthusiasts.

You will have your chance to drive your old car, truck, import, motorcycle or bicycle at the Buckeye Oktoberfest Car Show October 13, 2018 in front of Buckeye City Hall, 530 East Monroe Avenue, registration is 7 a.m. – 9 a.m. and the show ends at 1 p.m.