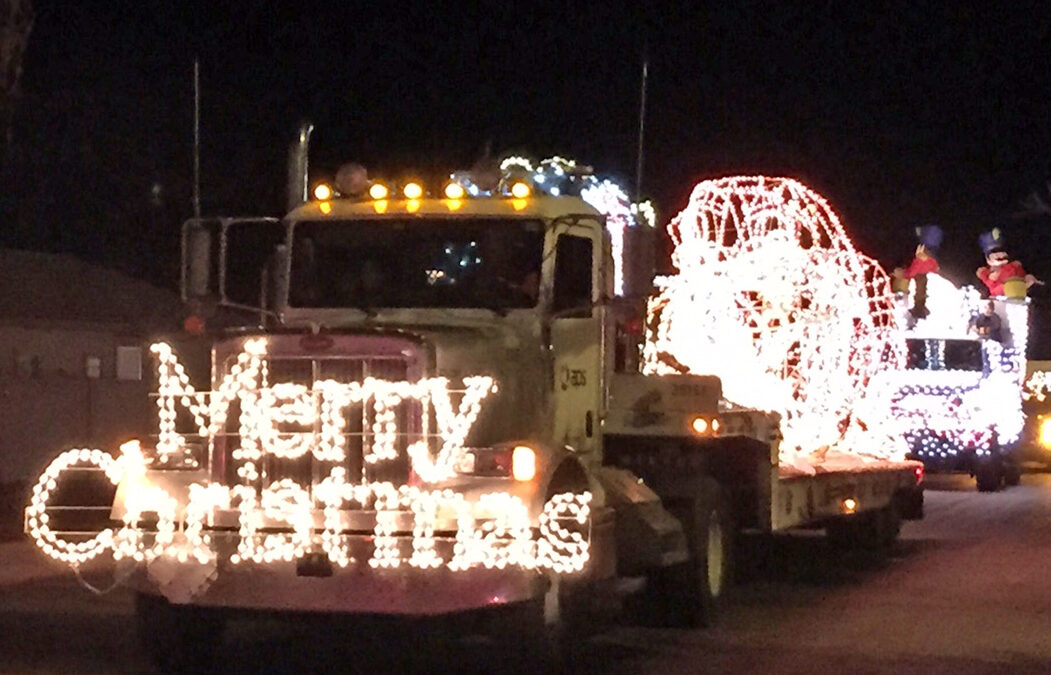 The forecast said rain but to everyone’s joy the clouds bypassed Buckeye’s “Glow on Monroe” Electric Light Parade on Dec. 13.

The annual parade featured 52 floats, among them semis towing flat beds, trucks, and vintage roadsters decked out in holiday lights along with decorated horses and school bands. Local businesses, clubs, churches and individuals made an overwhelming effort in the success of this year’s parade.

For some, like Cezar at Pizza Hut said it the first time his business entered the parade. Two weeks ago, when I spoke with him about joining the parade he excitedly said, “Hey, I can put the Pizza Hut lit signs on top of my car, I already have those!”  Cezar pulled it together  and had a lighted tree in the back of the truck and Pizza Hut red lights all over the vehicle. 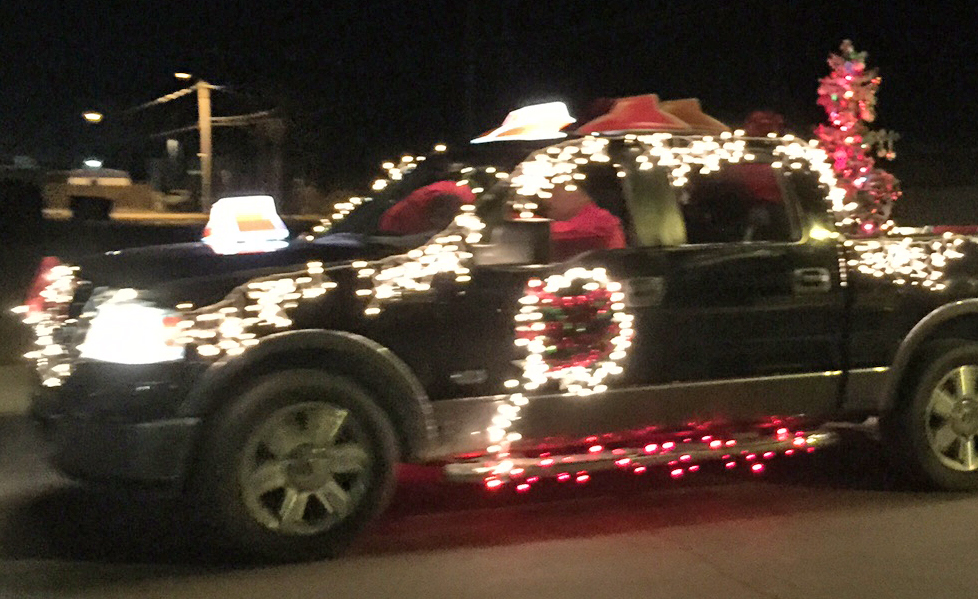 It’s the participants’ we can-do-it-ourselves attitude that makes this Buckeye parade special.

In the last Buckeye Council meeting, Councilman McAchran said, “Glow on Monroe is the most cost effective and best example of economic development for Buckeye!”

He’s right because I had the opportunity to ride in one of the floats and had first-hand perspective of how most businesses were doing along Monroe Avenue. Those that were open had lots of customers and there was a sea of thousands of parade spectators watching and cheering on the floats from their sidewalk perches.

The parade, a long-time tradition in Buckeye that heralds the arrival of the holiday season, seems to come together magically every December and most locals know it always happens on the same day.

Zarco, who works at EZ Barber, “Yeah, I know about the parade and it’s always the day after Day of the Virgin of Guadalupe.” 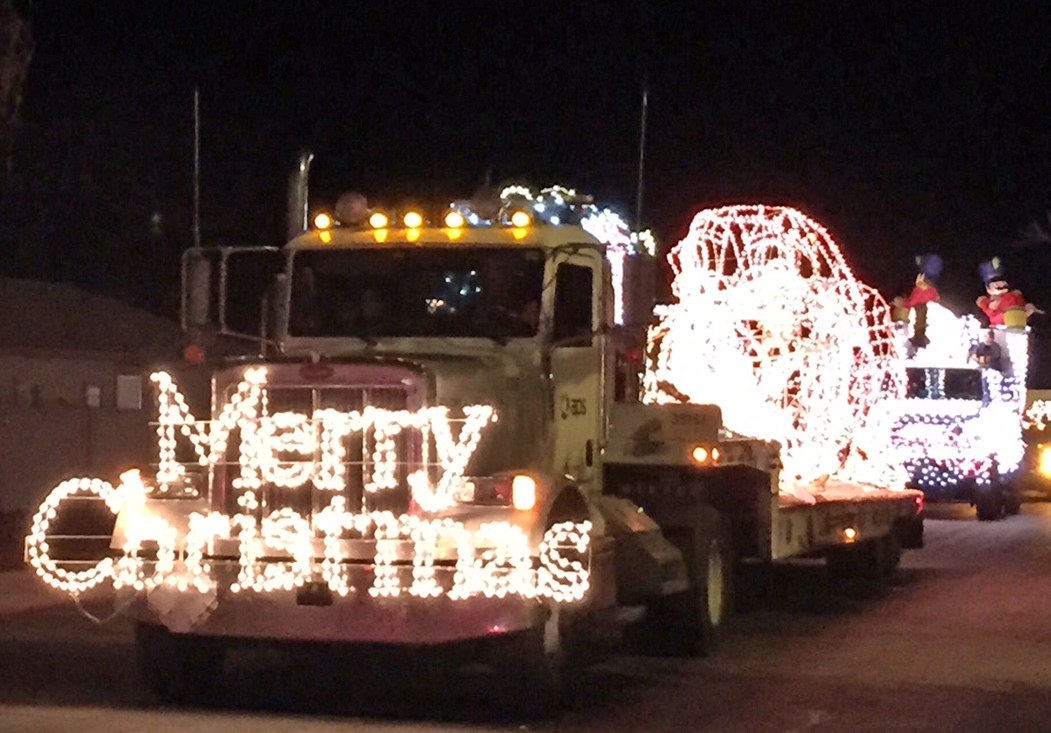 The winning float of a miniature replica of Historic Main Street by the Buckeye Union Elementary School Transportation Department really captivated the crowds.

Maria Gomez, the creative genius behind the hand-crafted Main Street big enough for an action figure to live in, explained how they did it.

“It took 2 weeks for us to complete this,” she said. “Many days we stayed up until 3 a.m. just to finish it on time!” 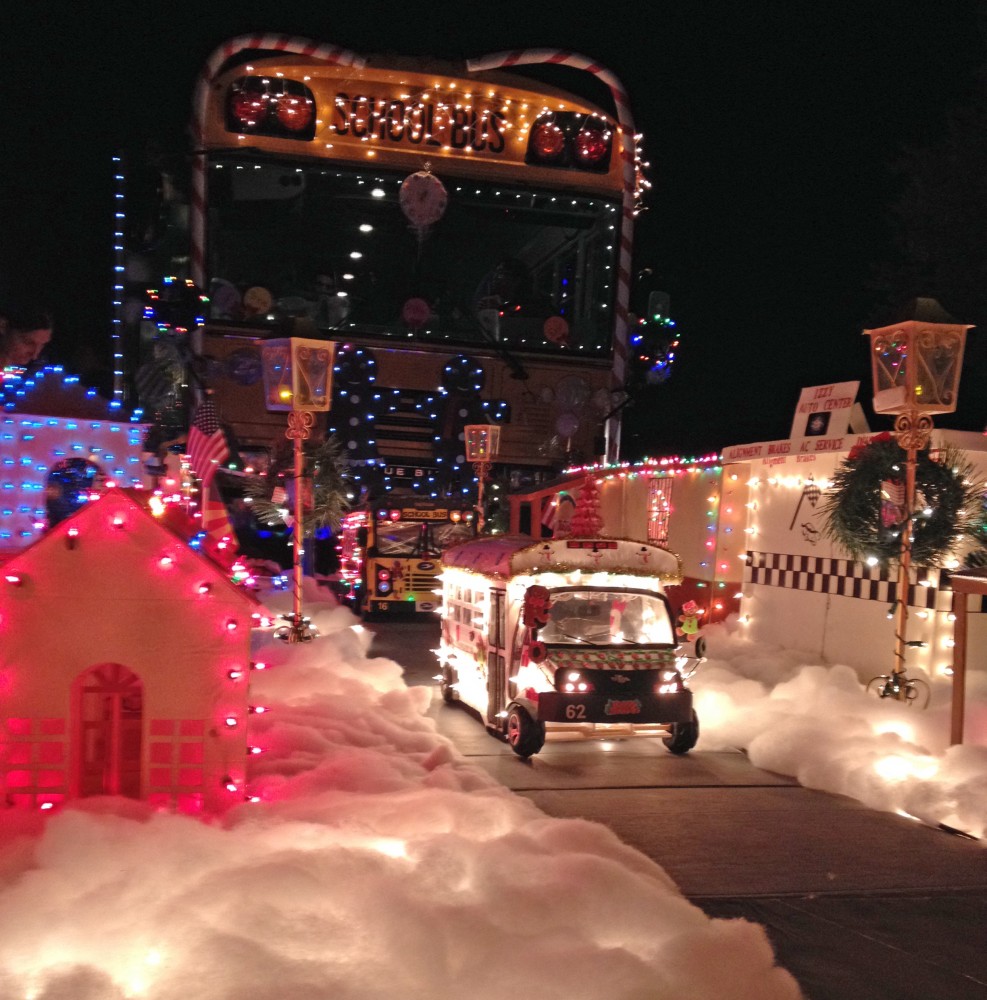 The cardboard buildings had bright windows (and some had drapes) that shone onto the fluffy cotton all over the streets for the snow. The detail was amazing. Town Hall was at the end of the street, Buckeye Feed and Country Store and True Value were at the other end of the flat-bed trailer and on both sides of the street were recognizable Main Street buildings. The school bus, full of adorable kids, was a twinkling gem festooned with tiny lights and hand-made ornaments dangling from the windows. 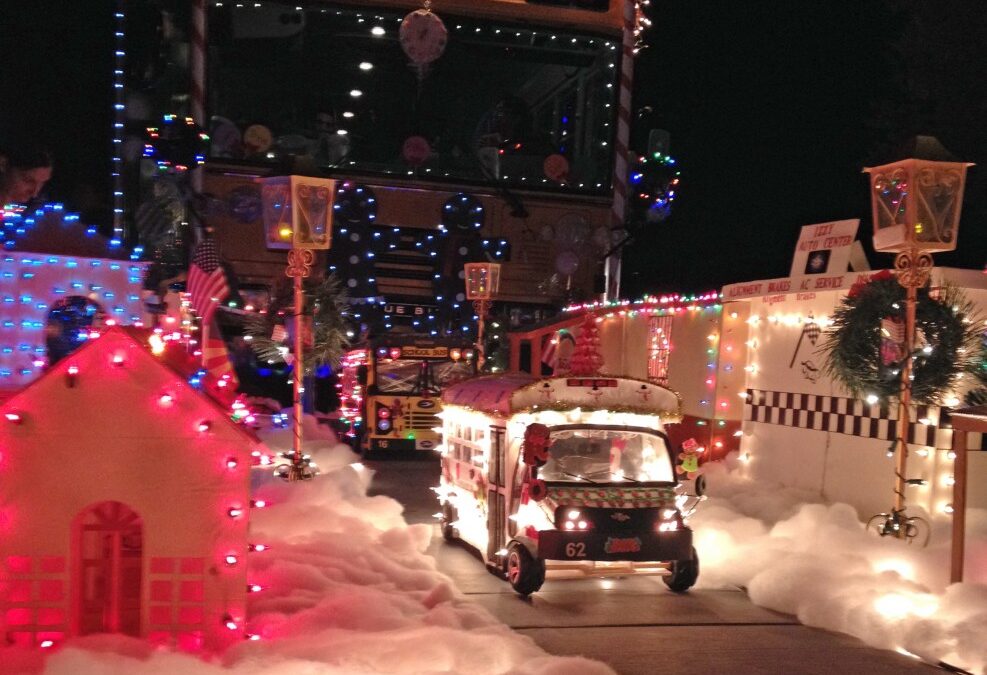 December 13th, Saturday was the annual Glow on Monroe Electric Light Parade in Buckeye, Arizona featuring  52 floats including semis towing flat beds, trucks, vintage roadsters, horses and school bands decked out in holiday lights.  Local businesses, clubs, churches and individuals made an overwhelming effort in the success of this year’s parade.   Buckeye Union Elementary School Transportation float took first place.  I had a chance to talk to Maria Gomez design director of the float as we were standing in the parade line up as it got dark in Buckeye last Saturday night.  As I gazed at the miniature replica of Historic Main Street in Buckeye, Arizona  big enough for an action figure to live in, I was amazed at the level of detail that was executed in just 2 weeks.

Why did you replicate Historic Main Street Buckeye?  I decided to focus my design on Historic Buckeye, because the City of Buckeye is unique and has a lot of character.

Describe your design process:  The design of the historical buildings have such a story behind them that I wanted to capture that in my design.  They have a western theme to them and it is very intriguing to me.  I would have liked to include several more buildings but unfortunately I ran out of time.  I would have loved to add in the Buckeye Museum, The San Linda Hotel and the buildings around it, and the Pharmacy.

What do you like most about working at this scale: I enjoy working with the scale of the buildings I created because I was able to capture a lot more details than I would have if I had created smaller buildings. 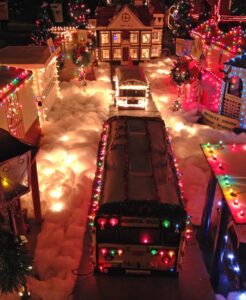 Biggest artistic influences: I was influenced by the architects and designers of the historic buildings.  Seeing photos of Buckeye’s past and the way the town looked so many years ago is inspiring to me. 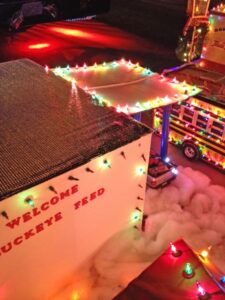 Proudest of: What makes me the most proud of my work is the reaction on everyone’s faces when they see it up close.  When a business owner see’s their building and the detail, all the way down to a garbage can by their entrance, it makes the long nights and tired hands all worthwhile.  They are so thankful for my hard work, and it makes my heart happy. 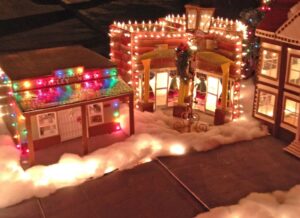 What’s next? My next projects are not set, but I would love to continue “building” Buckeye with adding in some more of Buckeye’s past and present.